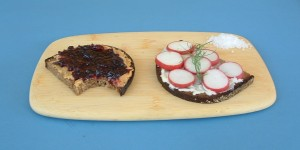 OK.  I admit it.  I am lucky.  Most mornings John makes breakfast for the two of us.

He’s not much of a cook (I do the cooking), but he’s is a great assembler.  Being Black Rooster’s resident Baltic Rye bread fanatic, John knows lots of lovely ways to serve 100 percent sourdough rye in the morning.  His coffee’s pretty good too.

(My job at breakfast, in case you are interested, combines the duties of diner (show up and eat) courtesan (show up and be charming) and pundit (peruse the newspapers, comment wittily.)  It’s a good gig.)

This morning, we ate thin slices of Baltic Rye topped with Whole Foods’ fresh ground peanut butter and black currant jam.  Yum.  We’re especially fond of berries that are native to the Baltic region like black and red currants, lingonberries and gooseberries, but strawberry and raspberry taste good too.

John is very slender (a state he credits to eating lots of rye bread), but he eats a lot of breakfast.  He topped another slice of Baltic rye with peanut butter, jam and cottage cheese.  He describes this combination as typically Latvian.

The piece de resistance of John’s breakfast: rye bread covered with a thin layer of butter, slices of radish and sea salt.  John really likes radishes.   Up until last week, these came from our unkempt little garden, but the first radish crop is now finished and the new crop is not ready for picking—God only knows what the recent heat wave has done to these delicate little veggies.

Occasionally, we eat fried or scrambled eggs for breakfast—both go great with rye bread.  Fried eggs and bacon (a Sunday morning favorite) is even better—rye bread knows how to talk back to bacon’s salty, fatty goodness.

My morning forays are pretty tame.  In the colder months, I like to top rye bread with a slice of hard cheese (half skim Yarlsberg works great, as does gruyere, cheddar, anything).  I pop this open face sandwich into the toaster oven until the cheese bubbles.   Then I smear Dijon mustard on the runny cheese.  Uh O.  It’s only 11AM and I am making myself hungry.

We have now diverged to the great to-toast –or-not-to-toast debate.   Some folks swear by toasted rye bread.  John believes toasting changes the bread’s flavor.  I’m neutral on this issue.  Truth is: when you toast rye bread and butter it, the butter melts.  The bread softens in the toaster, but in a moment or two it rehardens and biting down onto a toasted tidbit of rye bread and running butter, well really, it is a plain but ambrosial treat.  (John who thinks a lot about these things describes butter, “as the best cheese.”)  Hmmmm….melty butter….bubbling cheese….toothsome bread.

Really friends, I have to go.  The kitchen calls and I must eat.